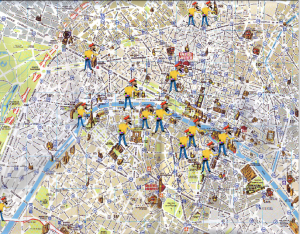 Chasing Hubert is oddly reminiscent of the children’s book “Where’s Waldo” that was so popular in the ’80s and spawned a host of “Where’s Waldo” commercial franchises. Personally, I found the whole “Where’s Waldo” theme frustrating rather than amusing. Staring at a page crammed with hundreds of tiny images in order to find the red and white striped ski-capped Waldo was not my idea of entertainment.  But it did give me an idea to mark the locations of Hubert’s etchings on a map.

Unskilled in cartography, I enlisted the aid of my husband who directed me to GoogleEarth where I proceeded to spend hours marking all the etching sights with an icon of a bereted and goateed French artist – I spare no effort for my Hubert. However, what my husband neglected to tell me before I dedicated chunks of time that could have been spent on holiday preparations was that because of size constrictions it is impossible to post a map with all of those details in a space barely larger than a postage stamp.  Instead of leading me to Hubert the intended map almost led to divorce court. Confronted with less than ideal conditions and map-making skills, the above map is the best that I could do. It is limited in that it shows only Hubert’s Paris subjects.  There are additional etchings set in other areas of France as well as a number in Belgium.  I’m afraid the Belgium map will have to wait until another time or another husband.

Other than flying to France and tacking wanted posters on lampposts in these locations I’m not entirely sure in what way this map will help my search – it sure sounded like a good idea at the time though. And it was an interesting project to distract me from the fact that I have not done any Christmas shopping to date nor is there one iota of holiday cheer in my house. Instead, my home currently resembles an FBI interrogation office with Hubert tracking maps hung by the chimney with care rather than the requisite stockings.

To add to my December distress, I received a not-too-encouraging response from Sothebys stating “Thank you very much for contacting Sotheby’s regarding your print. Our experts have reviewed the work and were unable to determine the artist or authenticity of the work. If you wish to pursue the matter further we would suggest contacting the Appraisers Association of America.” Yes, I do wish to pursue the matter and will attempt to give the AA of A call, however, I’m anticipating that there will be a fee associated with an appraisal and I don’t believe spending my meager Christmas budget on a Hubert appraisal will endear me to my loved ones. Then again, I could tap into a new commercial enterprise of my own called “Where’s Hubert”…