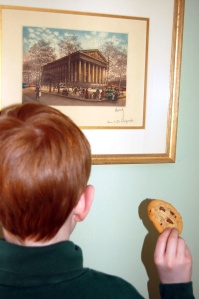 It might seem a paradox but Hubert’s rich macaroni and cheese put me in an exceptionally buoyant mood. After partaking in my good luck New Year’s Eve meal, 2010 appeared promising from both a Chasing Hubert and a personal perspective but before long my hopes were dashed. In the same way a bloodhound sniffs out criminals, challenges seem to dog me. Awarded a scholarship by a local college for a course in an area of study I know nothing about nor have had any experience in, I nevertheless embraced this latest challenge because after all, if Madonna can reinvent herself why can’t I? Unfortunately, a rock star future is not in my stars because the New Year’s ball barely touched down when I received a call apprising me that the college dropped the ball on funding for the scholarship.

The second bomb of 2010 was dropped when an email from the researcher at le Musee d’Orsay lit up my computer screen informing me that after examination of the etching copy I sent, it was determined that according to the style of clothes and the overall style of the print the artist is too recent for the musee which covers the time period between 1820 and 1870, and that Hubert’s etching probably dates after WW1.  She ends her note “as the subject is very common, I would not like to give you too much hope.” This researcher was the first person to give my Hubert search recognition and responded quickly and so pleasantly to all of my queries that I was really rooting for her to be the one to find Hubert. Reeling from these two major setbacks in 2010 (and we’re only into the first week of the New Year), compounded by fatigue from trying to burn off the excess calories from the French mac and cheese, I succumbed to a dark mood threatening to dominate the lingering dog days of winter.

While babysitting for my neighbor’s three young sons I found myself relating my Hubert story to ten year- old Nathaniel, having thoroughly exhausted every adult I know. He listened rapt with attention as I plied him with freshly-baked chocolate chip cookies. An hour later, after polishing off the second batch of cookies, he turned to me glassy-eyed and asked “What’s a blog?” When I got to the part where I whined about being stumped as to where to go next for information he suggested the library. I answered smugly that I had and he matter-of-factly replied “What about the BIG library?’ A bell went off and I immediately contacted the NY Public Library where the art and architecture department quickly responded and forwarded my email to their print department for further evaluation.

I predict a lucrative future career in law for Nathaniel – or maybe psychiatry? Thanks to my fifth-grade friend, hope was restored and I anxiously await – dare I say – some good news……

One thought on “Am I Smarter Than A Fifth Grader?”