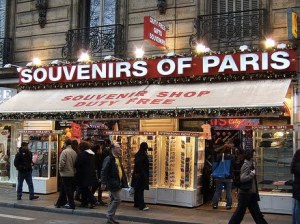 With the recent information imparted by the print specialist, I was eager to begin a new search. Confined indoors by the recent snowstorm I cozied up on the couch with my laptop and a cup of thé vert ready to pursue my new lead. Easier said than done. After an hour of googling souvenir shops in Paris all I came up with were copious hits for Eiffel Tower replicas in various sizes and materials, and a modicum of regret that I never actually purchased one as a memento when I was there.

The best case scenario would be a return trip to the City of Lights to do another in-person investigation but my suggestion was met with a reaction that sounded a lot like Ricky Ricardo’s oft-repeated reply to Lucy’s hair-brained ideas, “What’s the matter with you? Are you crazy or somethin’?” Looks like a trip to Paris won’t be happening anytime soon. At times like this I really wish I had a French pen pal. But I do have two readers with friends in French places so I contacted both readers to plead my case and ask for help in locating long-established souvenir shops and print galleries. Both came through for me. One, perhaps fearful that my notoriously poor mastery of the French language might inadvertently damage his relationship with his French friend, kindly offered to contact his friend for me. The other reader, also aware of my language problem, provided a few French phrases for me to insert in Google France to help locate the correct type of shops.

Of course, once I locate the shops there remains the next step, that of contacting the proprietors of said shops and relating my story. So I composed an email explaining my great desire to find my beloved Hubert. After re-reading the email I realized that what I wrote could possibly sound like a solicitation for an online French dating service, so I plugged the paragraph into a web-based translation site rather than relying on my high school French. Hopefully this will avoid any lost in translation issues. Now I just have to weed through the hundreds of sites on Google France to try to determine the most appropriate shops to contact – in French. Hindered once again by my my inability to read or write any more than the most basic French phrases, it’s been extremely slow-going and I’ve only been able to recognize a few sites to contact on my own and follow up with an email.

So far, I’ve yet to receive a response to the few emails I’ve sent. Not even one in error from French match.com….